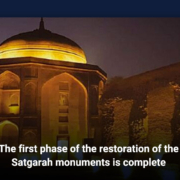 Mir Chakar was a 16th-century Baloch leader. He is regarded as a Baloch folk hero and a pivotal protagonist in the Baloch epic Hani and Sheh Mureed.

The organizers stated that the second phase would include constructing stores surrounding the tomb to showcase Baloch art and crafts. Additionally, a guest home would be built in the vicinity.

Director-General of the WCLA Kamran Lashari stated that the tomb was a significant landmark. That beginning next month, the authority will organize tours of the tomb for colleges and universities and welcome tourists to see this monument with a rich cultural past.

According to officials, Chief Minister Usman Buzdar assigned the work to the WCLA’s team and gave directives to repair the monuments at Satgarah based on the WCLA’s previous achievements.

Mr Lashari and his crew inspected the site and saw that the tomb needed restoration and the neighboring community. The site was documented using a 3D laser scanner (a cutting-edge method of documenting) for architectural documentation. The WCLA emphasized several points, including restoring the tomb structure, access to the tomb, consolidation of the fortified walls, entrance gates to the Main Bazaar, and the Walled City of Satgarah’s infrastructure.

Throughout the site documentation process, the WCLA team emphasised the Punjab Department of Archaeology work, which conserved the tomb in 2007. It restored the tomb’s dome, utilised brick tiles to conserve it, and painted Pakka Kali on the building’s outside and inside.

The WCLA developed a conservation proposal for the tomb and its surroundings. The project includes restoring the tomb, its access, and the surrounding event space and restoring the Main Bazaar gates and resurfacing the route leading to the guest house and administration office.

The officials stated that the tomb was partially hidden under the dirt. The decision was made to dig the ground to its original level. The tomb was located around four feet below ground level. The most effective method of approaching the tomb was to construct a ramp from the ground level to the tomb level. The concrete retaining wall enclosing the tomb was intended to restore the tomb to its original level. The courtyard or surrounding area of the tomb had reduced owing to encroachment. Residents were utilizing it as Shamlat Deh (community center) for housing their domestic animals. The seniors used to spend lazy summer afternoons beneath the shade of a large peepal tree. The space was adjacent to the tomb, and its misuse could damage the tomb’s outside façade. As a result, the panel determined that the surrounding region should be preserved for cultural activities and festivals. The courtyard’s floor was conserved, and bricks were put around the outside. The courtyard opposite the eastern side of the tomb was created for folk performances, while the sitting steps on the southern side of the courtyard were designed for the public.

The Gharki provided an additional feature to the courtyard (soakage well). The interior of the tomb was also in a state of disrepair. Pakka Kali was performed in an extremely irregular manner.

The officials stated that the WCLA documented the existing condition of Satgarah Walled City and the tomb, addressed conservation and rehabilitation of the walls using traditional materials, and enhanced infrastructure—drainage and street surfacing—and provided public restrooms and information to tourists.

Satgarah town is one of the district’s oldest communities. According to the local population, the name Satgarah means seven families,’ who arrived at this location with Mir Chakar-i-Azam Rind. Satgarah is usually considered to have derived its name from the terms Satt (seven) and Ghara (a pitcher), or seven Ghar (homes).

When Mir Chakar arrived in Punjab, the fort was built during the Sikh era and was named Satgarah Fort, today known as Satgarah village. The first phase of the restoration of the Satgarah monuments is complete.

According to certain historical records, the Satgarah Walled City is one of the earliest and most exquisite Mughal architectural styles, having been created in the mid-1500s during the reign of Mughal Emperor Humayun as a prize to Mir Chakar for the area of Satgarah.