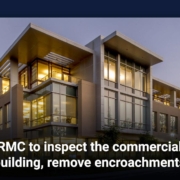 Many schools and businesses are being shut down in residential areas by the Rawalpindi Cantonments Board. There has been a rise in illegal encroachments and constructions over the last three years in the city, Mayor Khan said, and he wants to stop them. According to him, all commercial buildings in the area will be checked by the local government to see if they are safe. The local government will decide whether or not to check to see if the buildings were built before they had the permissions. People say that most buildings were built without building plans approved by the city.

Read more with EL news : Scheme 36 is owned by the Karachi Development Authority by SHC rules

The mayor said that the RMC would tell him how many illegal buildings were legal after the city fined them.

Band Khana Road was built 40 years ago to the Kuri and Sadiqabad roads. An official from the RMC said that the road was built as an alternative. It is a residential area, but the houses next to the road have been turned into businesses. The main roadblocks are the houses next to the road. The official also said that most of the plazas and workshops are built without permission from the city’s government. People also learned that several buildings on Liaquat Road, Sadiqabad, and Murree Road were breaking the law.