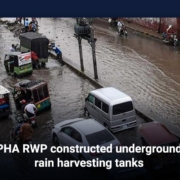 Read more with EL news : Seven businesses have been pre-qualified for the Sagian Road project

Underground water storage tanks were initially constructed in Lahore to improve rainwater management and to use the water for plantation and park irrigation. The project will begin in March and is expected to last three months. According to the source, the project’s objective is to conserve rainwater for future plantation and horticulture activities in the city. Underground rain harvesting tanks were constructed by PHA RWP.