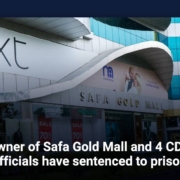 The court found CDA officials Khalil Ahmed and Khadim Hussain guilty and sentenced them to two years in prison. But these two officials have already served their time. Following the verdict, NAB agents apprehended the convicts. Three more stories in the mall were declared illegal by an accountability court.

The court ruled the mall’s three new levels unconstitutional and ordered the CDA to reclaim its rent from the owner. The owner of Safa Gold Mall had previously sought a pardon and was released on a plea deal. But the application was denied.

The NAB acted after the CDA board canceled Safa Gold Mall’s plot in 2017 due to three unauthorized stories and other irregularities in the building plan. In 2010, CDA sold plot 5 in Jinnah Super Market, where its health department used to be. But the civic agency turned the hospital into a commercial tract.

The allotment letter said that the floor-area ratio of the Safa Gold Mall would be 1:5 with 100% coverage, and the number of stories would be ground-plus-four, capping the structure’s height. The NAB charged Rana Abdul Qayyum with deliberately and criminally colluding with CDA officials to earn illicit favors and excessive benefits, costing the authorities Rs1.07 billion.