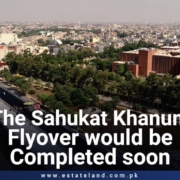 The Lahore Development Authority (LDA) has stated that the Sahukat Khanum Flyover would be completed soon by August 25th, despite significant cost increases and delays. However, officials working on the project believe that the new deadline is unattainable because the government owes the project contractor about Rs300 million.

LDA Director General Amna Imran Khan paid a visit to the Shaukat Khanum Flyover construction site to assess the progress and quality of the project. She told the person in charge to speed up the construction process and flyover would be completed soon.

According to LDA Chief Engineer Mazhar Hussain Khan, the project is being finished at the cost of Rs903 million, with the enlargement of Khayaban-e-Jinnah from Shaukat Khanum Chowk to Raiwind Road costing Rs460 million. Over 90% of the flyover’s development work has already been done, he said. Hussain further claimed that they had expanded the project’s labor force to finish by August 25.

In December of last year, the LDA’s governing council received administrative approval for the project, expected to cost Rs947.31 million. On Khayaban-e-Jinnah, u-turns will be remodelled, building four pedestrian bridges on Johar Town Main Boulevard. The project, however, was initially postponed due to a shortage of funding and then again due to mismanagement and general elections.

They initially estimated the cost of rebuilding Khayaban-e-Jinnah to be around Rs220 million, but it has now risen to Rs460 million according to revised estimates.

Read more with EL news: The government is considering renting out the PM House for events to generate income

On March 22, the contractors began construction of the Shaukat Khanum Flyover. Later that month, the authority broadened the project’s scope and granted another contract to Sarwar and Company for the renovation of Khayaban-e Firdousi and Khayaban-e-Jinnah.

The LDA had planned to make this a signal-free corridor. Still, recent rumours say that city developer and project consultant National Engineering Services Pakistan (NESPAK) intends to put a traffic signal beneath the flyover. Locals have expressed their displeasure with this. It is pointless to spend millions of rupees on a flyover and road reconstruction if the city’s traffic managers fail to remove the signal from Shaukat Khanum Chowk.

According to a project official, those expecting the flyover to open on August 25 were living in a dream. Out of a total of Rs809 million, the authorities had paid only Rs200 million to the project contractor.  The Election Commission of Pakistan (ECP) has blocked all development money before elections; most cheques are still stranded with the provincial treasury department.

The contractor has delegated some labor to the project because it is nearing completion, he said. Due to nonpayment, however, the project has been halted.

The government had previously put pressure on the contractor to finish the renovation by May 15. However, after expanding the project’s scope, the deadline was pushed back to the end of July. The authority is attempting that the construction of flyover would be completed soon by August 25, which some officials say is still unrealistic. However, residents in the neighborhood suffer significantly due to traffic congestion and pollution in Johar Town and the surrounding areas.