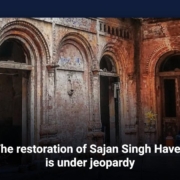 The restoration of Sajan Singh Haveli is in limbo. The 130-year-old Sajan Singh Haveli — which comprises seven gurdwaras and a temple in the city’s most densely populated Bhabhra Bazaar neighborhood — could not be restored because the provincial government failed to release funds approved for the project.

Prior to his arrest in the Ring Road scandal, former Commissioner Capt (retd) Muhammad Mahmood obtained approval from the Punjab government to restore the historical mansion for Rs400 million. The provincial government, on the other hand, did not release the funds.

Sardar Rai Bahadur Sujan Singh, a wealthy merchant, constructed the iconic structure 131 years ago. It began construction in 1890 and was completed three years later. The four-story, 24,000-square-foot structure features 45 rooms. Four of the large halls are furnished in the Victorian style.

The project also included the restoration of a temple and seven gurdwaras.

The plan called for painting the streets of the inner Bhabra Bazaar and the balconies of all ancient structures.

The plan for the establishment of a library on the ground floor and a cafe on the top floor where tourists could sit and learn about the mansion’s history.

The plan called for the restoration of electricity poles, telephones, and other wires in the streets surrounding the Haveli, as well as the establishment of a museum on the second floor of the mansion. Antiquities from the British and Sikh eras would be housed in the museum.

According to sources, despite the project’s approval, the provincial government has yet to release funds.

The Sajan Singh Haveli was home to a Sikh family who immigrated to India following partition. The family also owned a royal palace on Mall Road, which is now the location of Fatima Jinnah Women’s University.

Prior to this, a plan to establish a campus of the Fatima Jinnah University at the Sajan Singh Haveli was considered but never implemented.

The mansion is a work of art in the style of British architecture and a sight to behold.

The purpose of opening this mansion to tourists was not only to preserve and introduce cultural heritage to future generations, but also to promote Pothohar culture.

Several attempts were made to ascertain Rawalpindi Commissioner Syed Gulzar Hussain Shah’s version of the Sajan Singh Haveli’s delay in renovation, but he did not respond.