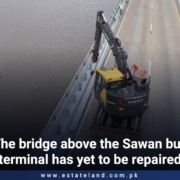 During the monsoon of 2019, the bridge linking Sawan bus terminal and GT Road in Nullah Leh collapsed due to the rapid water flow. As a result, the bus terminal and the surrounding community have no connection.

Following the event, the Rawalpindi administration stated that it would fix it as quickly as possible. However, three years have passed, and the problem remains unresolved. Rebuilding the bridge would provide motorists with alternate access to GT Road while connecting adjacent businesses to the main road.

Meanwhile, flooding in Nullah Leh has caused erosion on both sides of the bridge. In addition, a big pole belonging to WAPDA toppled due to decay, and the lack of a protective wall along the banks posed a threat to the adjacent bazaar, which could be flooded at any time.

Muhammad Ghulam Din, a shopkeeper, said the bus terminal management and residents had submitted hundreds of applications to the district administration, but none had been approved. According to him, erosion on both sides of the broken bridge poses a severe hazard to residents living along the banks and obstructing bridge rebuilding if it is delayed any longer.

Yaseen Butt, a transporter, explained that their cars must take longer from the Sawan bus terminal to the GT Road stands, which adds to the cost and time. He encouraged the Punjab government to construct the bridge as soon as possible.

Speaking on the condition of anonymity, a Public Works Department employee told The Express Tribune that a significant stumbling block in the bridge’s construction is a jurisdictional issue but refused to elaborate.

Read more with EL news: For the completion of airport metro bus project, they accepted a consultant’s bid