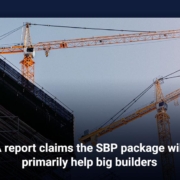 The SBP package will benefit only important builders, according to a report. The current State Bank of Pakistan (SBP) incentive package for the building and housing sectors will assist influential builders in high-end financing housing. Still, it will fall short of the national objective of generating affordable housing units in the country.

This observation was made by Tabadlab, a private research business based in Islamabad. It cast doubt on the State Bank’s regulatory position in the housing and construction industries.

This responsibility, it stated, should be assigned to the Real Estate Regulatory Authority (RERA), for which an enabling statute had previously been passed by parliament.

“It will also make a negligible contribution to Pakistan’s 10 million housing unit shortage,” it stated in a policy analysis released on Friday.

The study highlighted that due to a lack of fundamental changes to energise the economy, the SBP had been charged with boosting various sectors for many years, either through concessionary financing for exports, renewable energy, SMEs, or industrial expansion.

The SBP has also encouraged development operations over the last several years, including mandated targets for housing finance and construction financing and managing interest rate subsidies on behalf of the government for low-cost housing and programmes such as the Kamyab Pakistan Program.

It stated that the proposed SBP Amendment Act 2021, which sought to prohibit the central bank from engaging in such policy influencing and market-shaping activities, has been shelved for the time being. The government continues to rely on the SBP to assist in achieving its broader policy objectives, with the construction financing guidelines issued on Sept 10 serving as an excellent example of such pursuit.

The SBP’s attempt to promote the construction sector and assist the government in meeting its housing supply target is not problematic in spirit, the paper noted, but rather than providing broad guidelines to commercial banks and allowing them to develop their criteria to accomplish these goals, the SBP was formulating very specific policies, intruding into a private sector.

Additionally, “the SBP is likely to ensure micromanagement of the entire construction credit process” due to this. The study stated that autonomous RERAs in each province were critical for consumer protection and increased openness in the real estate sector.

According to the report, builders and developers resisted RERA’s implementation because it increased transparency and responsibility in the real estate market.

The advantage of RERA is that regulation applies to an entire region or province, requiring all builders within that territory to comply. However, when SBP requirements intrude on RERA functions, they will apply solely to builders who obtain construction funding from construction lenders.

As a result, builders may be discouraged from obtaining construction financing and prefer to complete projects using investors’ equity or purchaser deposits. It would have the opposite impact of the effects the SBP wishes to instil in the housing and construction finance markets.