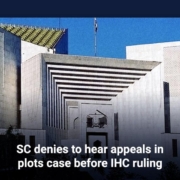 The apex court dismissed a challenge by the Federal Government Employees Housing Authority (FGEHA) to the Aug. 20 IHC judgement on Tuesday, after being informed that the high court had sought written responses from the parties concerned.

“We do not believe it is appropriate to continue further in a case where the petitioners have challenged the high court’s interim judgement, as the ruling has been reserved and will be released shortly,” a three-judge bench led by Justice Umar Ata Bandial remarked.

“It is necessary to comprehend how a challenge to an interim order can be sustained when the pending subject has been reserved for announcement of the judgement,” the bench stated.

Read more with EL news : Encroachers in Kohat have been asked to quit state land within three days

On Monday, the IHC’s division bench reserved its verdict on the FGEHA’s August poll for assignment of plots in Islamabad’s F-14 and F-15 sectors. The court was hearing identical petitions challenging the ballot’s allocation of 4,723 plots to high-ranking judges and administrators.

Justice Syed Mansoor Ali Shah, a Supreme Court judge, advised Munir Paracha, an advocate for FGEHA, that his client should have challenged the Islamabad High Court’s order postponing land allotment. However, because the IHC had reserved its decision, the judge continued, the current case had become infructuous.

Justice Shah stated that the petitioner should have brought his complaint to the IHC’s exercise of suo motu jurisdiction in the matter directly to the high court.

Justice Bandial informed the petitioners that they could appeal the allotments either intra-court or to the apex court following the IHC’s decision.

The Supreme Court stated in its judgement that the petitioners argued that the Aug. 20 IHC interim order went beyond the disagreement before it and that by doing so, the high court exercised suo motu authority to address topics unrelated to the case.

The petitioners contended that the IHC lacked the authority to act suo motu. The FGEHA petitioned the top court to vacate the Aug 20 IHC judgement suspending allotments to judicial officers serving or having served in the high court and Islamabad District Courts.

The IHC not only sent the case to a larger bench for further consideration, but also expressed amazement that almost every judicial officer of the capital’s District Courts was a beneficiary of the ballot for assignment of plots in the F-14 and F-15 sectors. This casts doubt on their ability to adjudicate petitions brought before them by concerned land owners, the court stated.

The high court determined that there was a conflict of interest because the plots were given away at significantly cheaper prices than market rates. As a result, each beneficiary has a financial stake.

Additionally, the bench remarked, the list includes judicial personnel who had been fired for misbehaviour or corruption.

The appeal noted that the petitioners had not contested the acquisition of the land before the high court.

The high court raised issues in its Aug 20 ruling that were not addressed by the petitioners and for which no prayer was made in the writ petition, the appeal stated.

“This equates to the exercise of suo motu jurisdiction, which the high court lacks. The high court may exercise its writ jurisdiction under Article 199 on the application of either an aggrieved party or any other person. “The Aug. 20 decree is manifestly unconstitutional,” the appeal stated. It maintained that the FGEHA was a public institution dedicated to providing housing for federal government employees and retirees, but had been vilified in the media by vested interests.