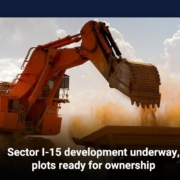 The Capital Construction Authority (CDA) has reported that development work at Sector I-15 is progressing at a steady pace.

According to the information available, 3,000 plots in the mentioned sector, out of a total of 10,000 plots, are ready for possession. The fact that a large portion of the work has been done was also brought to light. The CDA began development work in Sector I-15 last year, which included the construction of roads and streets, among other things.

The development work will be completed by the end of next year, according to the authorities (whose names were not published)… The authorities said that work in Sub-sectors 1/3 and 4 is now underway, and that the CDA will shortly issue a call for tenders for Sub-sectors I-15/2 and I-15/3.

Read more: The Sialkot-Kharian addition of the RWP is a game-changer for the region, according to the Prime Minister.

Furthermore, the spokesperson for the CDA, Syed Asif Ali, indicated that the administration was concentrating on all delayed sectors, including E-12, and that development activity was moving forward. According to the plans, all of the displaced people will be assigned a plot in Sector I-12.

It has been stated that many of those affected have received compensation, with only a handful remaining. According to reports, the federal cabinet directed the CDA to resolve the concerns in Area E-12 and to develop the sector in order to alleviate the hardships of allottees.