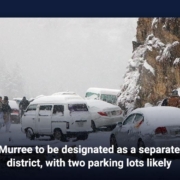 The resolution was made to strengthen the hill station’s resources and administration and to prepare effectively for impending disasters. The CM has established a team to investigate the deaths of tourists trapped in Murree during the snowstorm.

The CM requested recommendations from the Revenue Board (BoR) and the Chief Secretary. He also recommended immediately appointing a police superintendent and additional deputy commissioners.

Additionally, two police stations have been opened on an emergency basis. The two plazas will be constructed at Sunny Bank and Jhika Gali. To avoid traffic congestion, the parking lots will be connected to Murree Mall Road via a shuttle service.

In a press conference, the CM stated that in the future, only a limited amount of transport and people would be permitted to enter. The link roads to the hill station are currently being planned. He also ensured that strict action was taken against hotel owners who overcharged.