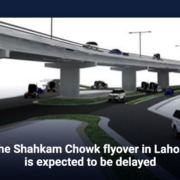 There is still work to be done on the ground, such as road construction and other jobs, that will take about 15 days.

The Shahkam Chowk project hasn’t been finished on time because of technical problems, not because of money. We were even supposed to finish the project by March. The Lahore Development Authority’s (LDA) Director General Ahmad Aziz Tarar told Dawn on Tuesday that the work on launching girders had been going on thanks to power shutdowns from the public sector organisations Lesco and NTDC, but it had to be stopped because Ramadan meant there would be no more power shut downs.

If the Lesco and the NTDC start shutting down for certain hours off and on, there will be no light in a large part of Punjab, including Lahore, the DG said. He said he was expecting the shutdowns and the resumption of the girder launching work after Eid, and that the project would be done by June 5.

Lesco didn’t want to shut down during Ramadan, which was the main reason for the delay.

On time: The work on a new bridge over the Shahkam Chowk started in July of last year. However, the land acquisition (64 kanal) took a long time because of some problems with the way things work. It was only in November of last year that the contractor got all of the land.

Read more with EL news : The route of Peshawar Road via Pindi would be signal-free

The total cost of the project is said to be more than Rs4.233 billion, which includes the construction cost of Rs2.5487 billion. Project: It will cut down on traffic at Shahkam Chowk. It will also cut down on time and money. Before December 5, about 55% of the work was done. The DG said that he hoped that the Sheranwala Gate flyover project would be finished in the next few days. The Sheranwala project, which began in June of last year, was also supposed to be finished by March, but it didn’t happen. But there are some technical and administrative problems that haven’t been worked out yet. The Rs5 billion project cost Rs2.634 billion to build and the rest to buy land. At 1,000 metres long and 17 metres wide, the flyover with ramps has 19 spans.

The Rs2bn Gulab Devi Underpass project, which was supposed to start in June or July of last year, was put on hold because of problems with the rails.

Most of the problems have been solved by now, but there are still some problems. It’s also possible that we’ll start work on lane marking in the underpass soon. Some time in the next few weeks, all the work would be done. The underpass was already open to traffic in December of last year.