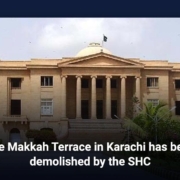 SHC demolishes Karachi’s Makkah Terrace On Monday, the Sindh High Court (SHC) directed authorities to demolish a piece of Karachi’s four-story Makkah Terrace and requested a report within a month.

The petitioner’s lawyer informed the court that the building was constructed on a 500-square-yard plot of land and that the project also contained open space adjacent to the structure.

Justice Rajput expressed his outrage at the director-general of Sindh Building Control Authority (SCBA) for the institution’s involvement “Our rulings are not carried out. Inform us of any disciplinary action taken against the responsible officials.”

The judge noted that the National Accountability Bureau (NAB) could be tasked with initiating action against the authorities in question.

Read more with EL news : A foreign firm wants to control an explosion at Nasla Tower

Subsequently, the court directed the DG to demolish the illegally constructed portion of the building. .

“You will have to demolish everything that was improperly created,” Judge Alam observed.

The court directed the official to initiate proceedings against the guilty officials and requested a report on the matter within a week. The Makkah Terrace in Karachi has been demolished by the SHC.

The Supreme Court demads the clearance of all encroachments and buildings established in Karachi using forged lease certificates late last month. Justice Rajput expressed his outrage at the Sindh Building Control Authority’s (SCBA) director-general for the agency’s involvement. “Our decisions are not followed. Notify us of any disciplinary action taken against the officials responsible.”

Additionally, the highest court directed all dwellings and commercial structures constructed on forged leases to be demolished in the port city. The Makkah Terrace in Karachi has been demolished by the SHC.