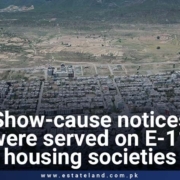 All five housing societies operating in E-11 have been issued show-cause notices by the Capital Development Authority (CDA) for violating building by-laws. They took the measure in the aftermath of the sector’s urban flooding, which was caused by a housing society blocking a natural stream.

According to a CDA press release issued on Sunday, “the CDA administration has taken strong notice of unauthorized constructions and violations of building by-laws in Sector E-11 of the federal capital.”

According to the report, the CDA’s Sanitation, Machinery Pool, and other departments cleaned up the impacted region. In addition, they had raised the number of rubbish bins in various locations throughout the area.

In addition, the CDA government has instructed the Building Control Authority in Islamabad to enforce the master plan rigidly. The need of following the CDA rules and regulations for the construction of residential and commercial buildings has been emphasized.

Read more: As a result of a cloudburst, Islamabad has been flooded