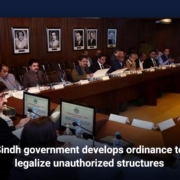 The Sindh government issued an ordinance on Wednesday to provide relief to the province’s residents, demolition of Karachi’s Nasla Tower and other structures purportedly constructed on encroached property.

The document has been sent to Governor Imran Ismail in order to legalize unauthorized housing units in the province.

Sindh Commission for Regularization of Construction Ordinance, 2021, will be promulgated by the provincial administration in the absence of the Sindh Assembly. Sindh Governor Imran Ismail would issue the ordinance on the authority provided by Article 128 of the Constitution.

The ordinance, which will become law if passed by Ismail, establishes a seven-member body to review zcases of unauthorized construction for regularization.

Sindh High Court judge who will determine the conditions and sanctions for regularizing unlicensed structures whose demolition would certainly result in human tragedy.

Other than ex-officio members, members of the panel shall be nominated by Chief Minister Syed Murad Ali Shah within 15 days of its proclamation, according to the draught, which is available to The Express Tribune.

Additionally, the commission would pursue police who failed to act against illegal land occupation and unauthorized development.

Karachi Administrator Barrister Murtaza Wahab said the proposed legislation is identical to one previously introduced in Punjab to regularize illegal structures, with the addition of a paragraph stating that the anti-encroachment drive should be suspended following the law’s enforcement until the commission rules on the matter.

Wahab anticipated the governor would verify the ordinance and, on the advise of the chief minister and Sindh cabinet, sign it into law.

Declaring that the ordinance was being brought to assist people during a tough time, he stated that it was being introduced for the greater good of the people.

The administrator expressed hope that Sindh’s opposition would not oppose the legislation, which was being brought for the greater good of the people.

On Monday, Sindh Information Minister Saeed Ghani requested the Supreme Court to allow the provincial government to regularize buildings constructed in violation of laws and regulations, citing the significant impact on the lives of a large number of people.

Ghani stated that regulation infractions occur during the development of structures such as the Nasla Tower, which have been regularized in Islamabad.

“Why are there different standards for ordinary citizens in [Prime Minister] Imran Khan’s residences in Bani Gala [in Islamabad] and Bahria Town [in Karachi]?” he enquired.

The provincial minister stated that while the Muttahida Qaumi Movement (MQM) was allegedly involved in illegal structures in Sindh, the province government should be permitted to regularize them because they impacted millions of people. “Steps like dismantling buildings like the Nasla Tower will result in the loss of thousands of jobs,” he warned.

He requested the court to establish a panel to oversee such endeavors.

Residents of Nasla Tower were notified in October by the assistant commissioner for District East to evacuate the building in accordance with Supreme Court instructions.

In June, the apex court ordered the destruction of Nasla Tower and affirmed the verdict in a September review petition.