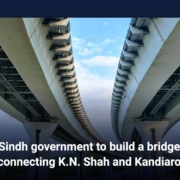 The CM stated that the department of works and services had developed a thorough plan for the bridge.

“The project will greatly cut travel time between Khairpur Nathan Shah and Kandiaro,” the CM stated, adding that the Larkana-Gambat bridge, located 181 kilometers upstream [of the proposed bridge], will save 131 kilometers.

He claimed that the Dadu-Moro bridge (downstream) was placed at 122 kilometers, saving 72 kilometers of trip.

They informed the conference that the bridge would begin from the Indus Highway near Khairpur Nathan Shah in Sita Village and conclude at Kamal Dero in Kandiaro on the National Highway (N5). The bridge and roadways would be roughly 25 kilometers long, excluding approach roads from the N5 and N55.

Read more with EL news : G.T. Road to be expanded from Taxila to Hassanabdal

The PPP policy board unanimously authorized the project’s exemption from Sindh sales tax, and it would be discussed and decided upon in the upcoming cabinet meeting.

The meeting was informed that they would repay the debt associated with the Sir Aga Khan Jhirk Mulla Katiar bridge project on the Indus River by Nov 30, 2020.

The PPP policy board unanimously approved issuing a letter of award/acceptance to Zahir Khan & Brothers, the preferred bidder with the highest bid price reviewed.

The meeting was informed that the Dhabeji zone would enable local and foreign investors to construct industries.

Before the 34th meeting of the KWSB, representatives from the International Finance Corporation, HMCO BNR, and TYPSA presented the Karachi Hub Water Canal Project.

Along with accepting broad project specifications, the board opted for a 15-year concession period for the project. It stated that this would be the country’s first competitively bought water PPP and more water PPPs to come.