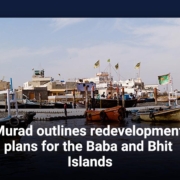 “I am also working on a plan to connect all three islands — Bhit, Baba, and Shams Peer — to the city,” he said Wednesday at a ceremony on Bhit Island honoring fishermen leader Hussain Aslam Bhatti. The event drew a sizable crowd of local fishermen. Appropriate officers escorted the CM. The redevelopment plans for the Baba and Bhit Islands is the need of time.

Mr. Shah traveled to Bhit Island in a boat, where he addressed a reception, stating that he had a close relationship with fisherman. “My village is located near Manchhar Lake, which is home to hundreds of fisherman who live on boats and along the lake’s banks,” he explained, adding that he has direct knowledge of fishermen. He said that he was also looking into measures to purify the water in Manchhar Lake, contaminated by effluent and brackish water pouring from farms. The redevelopment plans for the Baba and Bhit Islands are in priority consideration.

“I have to rehabilitate the fisherman of Manchhar Lake, and I am eager to tackle the concerns of Karachi fishermen since they are Benazir Bhutto’s jialas,” he explained. Three floating jetties, passenger shelters, and an island-to-island bridge to be constructed

On Bhit and Baba islands and Mubarak village, the CM announced the construction of three floating jetties and passenger sheds. “We have given Rs250.561 million for this project, which the local government department will carry out.”

He asked Local Government Minister Nasir Shah to begin construction on the program immediately and complete it before the end of the year. Mr. Shah also announced the approval of Rs600 million worth of drainage, water supply, and brick road projects for the twin islands of Baba and Bhit and Shamspir and Sualehabad. In response to fishermen’s requests, the chief minister stated that he would explore installing a reverse osmosis facility on Bhit. The redevelopment plans for the Baba and Bhit Islands is in prority list now.

The fisherman informed the chief minister that their communities’ lease had ended and wanted a new lease. The chief minister then told the commissioner to complete the task; if the license had expired, he would issue a new one through the Board of Revenue.

The fisherman informed the chief minister that Benazir Bhutto had visited Bhit Island and announced a playground but was unable to do so since her administration was deposed shortly afterward. Mr. Shah stated at this point that his “great leader made the playground declaration” and that would keep her promise would be kept at all costs.

The schemes he announced included the construction of brick roads in six union councils of DMC Keamari, UC-41 to UC-46, for Rs99.35 million; the improvement of water supply and installation of sewerage lines and paver blocks in UC-40 and UC-42 of DMC Keamari for Rs140 million; and the construction of roads, drains work, and paver blocks in UC-41 Bhit, Baba, Shamspir, Younasabad, and Su.

The CM said that he intended to connect all of DMC Keamari’s islands to the main highways, allowing for car movement. “This bridge is in the planning stages, and Inshallah, the vision will become a reality,” he continued.

The chief minister inquired of the fishermen whether they had been vaccinated, to which the majority responded negatively. He stated that because they were still engaged in fishing, they could not be vaccinated.

The CM asked Karachi Commissioner Navid Shaikh to organize a vaccination unit on a boat and transport it across islands to vaccinate the eligible population. Previously, aboard the boat that the CM used to cruise to the island.

The chief minister announced Rs600 million in initiatives, as the local fisherman had requested. He paid a visit to an under-construction jetty following the reception and urged the project director to expedite its completion.