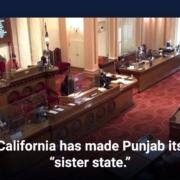 The California State Senate passed a resolution on February 16 that made Punjab a sister state of California (Wednesday). The status quo will stay the same until 2026.

According to reports, Chris Holden, a member of the Assembly, proposed Concurrent Resolution # 104, which makes Punjab a sister state. This resolution is legally binding. As a result of the resolution, Punjab will be able to get help with education, agriculture, the environment, and cultural ties. It will also be able to get help with technology transfer and bilateral contacts. In the Senate, Senator Sydney Kamlager read the resolution, which was passed 36 to 4, with four members absent. The resolution was passed 36 to 4.

Pakistan’s bread basket is Punjab, like California in the United States, says the resolution. With more than 110 million people working and living in the province, it is also the most crowded, which makes money for the rest of the country. It’s important to note that the resolution was put forward on August 17, 2021, and passed by the assembly on September 7, 2021.

“Technology Pura” is a special economic zone that will be set up in Punjab.

The Senate has now agreed to the resolution. He said that the sister state designation will help the two states have more of a multifaceted relationship.