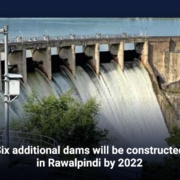 The administration has already committed funding to Annual Development Program initiatives (ADP). According to accounts, work on the Mujahid Dam has already begun. The following table summarizes the project’s financial allocations:

Jawa Dam in Murree will cost PKR 900 million. The feasibility study and Phase I of the project have been completed, and work is scheduled to begin shortly.
Continue reading: CDA will construct a three-kilometer section of Rawalpindi Ring Road

Papin Dam in Chak Beli would cost PKR 3.3 billion and will irrigate 50,000 acres of agricultural land.
Dadocha Dam is being constructed at a cost of PKR 3.5 billion to give water to Rawalpindi cantonment city and the surrounding region.

Read more with EL news : LDA devised a novel method for the quality of construction materials

The Chahan Dam has already been completed, and work has begun on enhancing its water storage capacity. The project, which is estimated to cost PKR 6 billion, will involve the installation of water treatment units for regional union councils. Six additional dams will be constructed in Rawalpindi by 2022.