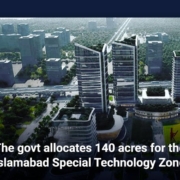 Read more with EL news : The CDA board has accepted the layout plan for I-14 Markaz

Chak Shahzad is the location of the given land. Mr. Mansoor Ahmad Qureshi, CEO of the STZA, announced that the Prime Minister has directed the STZA to construct technology zones.

throughout all provinces around the country, with provincial governments and the Capital Development Authority collaborating on the development of individual by-laws (CDA). Similarly, STZA will manage and regulate these technology zones, which will facilitate the establishment of offices by multinational and domestic enterprises.

Additionally, Qureshi stated that STZA has received 39 applications from a variety of industries, with a decision still pending. He stated that the Prime Minister had approved the conversion of Lahore’s Knowledge Park into a Special Technology Zone. Similarly, the federal government has directed that 14 additional STZs be established across the country in all provinces. logical Zone, the government allots 140 acres.