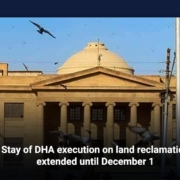 The DHA’s stay of execution on land reclamation has been extended until December 1. On Tuesday, the Sindh High Court announced that its earlier interim restraining order prohibiting the Defence Housing Authority (DHA) from reclaiming additional land from the beach, granting it to anyone, or forming a third-party interest would remain in effect until December 1.

When the matter was remanded to a single-judge bench presided over by Justice Zulfiqar Ahmad Khan, several lawyers submitted vakalatnama (power of attorney) for the DHA and other defendants and requested time to file remarks.

The bench noted that, under its previous decision, the official assignee had taken some procedures, but the report had not been filed.

None of the representatives for the Karachi Urban Lab (KUL) or the National Institute of Oceanography Pakistan (NIOP) was present, and the bench gave them notices for the next hearing directly.

The bench directed that such contentions and responses be submitted in writing prior to the next hearing in order for the bench to issue an appropriate order.

While adjourning the case until December 1, the bench directed that notices to unserved defendants be reiterated and that the interim order entered at the last hearing be continued until the next hearing.

On Oct 23, the bench directed the DHA and other official defendants to ensure that land previously sanctioned as public spaces was not used for commercial or gainful purposes and directed the official assignee to inspect the reclaimed land used by the DHA.

Six plaintiffs filed a lawsuit under the Whistleblower Protection and Vigilance Commission Ordinance 2019, alleging that recovered land was being abused and that land designated for cantonment was being exploited for commercial and profitable purposes.