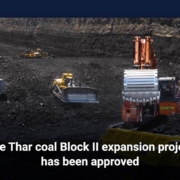 The Thar coal Block II expansion project has been approved. According to a statement released on Monday, the Sindh Engro Coal Mining Company (SECMC) board of directors has approved the development of its Thar coal Block II mine to produce 12.2 million tonnes per annum. According to a representative for Engro Energy, which owns a stake in SECMC, this development is expected to lower the price of coal from $60 per tonne to $27 per tonne.

Read more with EL news : Plots for bureaucrats and judges to be appealed by SC

When the company completes the expansion by June 2023, Block II coal will be the cheapest fuel source in the country, with a price of $27 per tonne.

The government will allow Pakistan to save $420 million each year on foreign exchange. Additionally, the expansion of SECMC’s Block II mine will reduce Rs74 billion in the circular debt on an annual basis, according to a company news statement.

According to the International Energy Agency, international coal prices recently reached an all-time high of over $250 per tonne. As stated in the announcement, the increase will hedge against the volatility of coal’s international pricing while also alleviating pressure on the country’s current account deficit. In addition, the company stated that at the current price of $27 per tonne, Thar coal would be able to transition from its current application in the energy industry to other applications.

According to the company, the extended project will cost $93 million and enable Thar Block II to generate a sustainable supply of 12.2 million tonnes per year for the next 30 years.

SECMC now has an annual output capacity of 3.8 million tonnes, used to generate 660 megawatts of power since the company began operations in April 2019.

SECMC’s production will expand to 7.6 million tonnes per year during its second phase. A total of 1,320MW of electricity will be generated as a result of this.