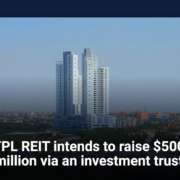 According to Ali Jameel, chief executive officer of TPL REIT Management Co, the company plans to finalize the deal by June, with an internal rate of return of more than 30% in local currency.

“TPL REIT Management Co intends to raise 60% of the targeted capital from overseas investors, 30% from domestic investors, and the remainder from its parent TPL Properties Ltd,” Mr. Jameel was reported by Bloomberg as saying.

Read more with EL news : The reporting process for realtors has been streamlined

He stated that construction activity was booming due to increased access to finance for both developers and buyers, and the trend was projected to continue tremendously in the coming years. Additionally, he stated that the company planned to float the REIT in Pakistan and abroad within three years. The proceeds would be utilized to finance three real estate projects, including a technology park, a high-end residential skyscraper, and a gated seaside community.

According to the company’s website, TPL Properties Limited was incorporated in Pakistan in February 2007 as a private company with the primary objective of investing in, purchasing, developing, selling, leasing, or disposing of real estate assets. TPL REIT seeks to raise $500 million through the establishment of an investment trust. the company plans to finalize the deal by June, with an internal rate of return of more than 30% in local currency.

TPL Properties Limited, the company reports, completed its first public offering in June 2016 using a Book Building procedure. The company is TPL Corp Ltd’s real estate development arm. He added that construction activity was rising as a result of developers’ and buyers’ enhanced access to financing.