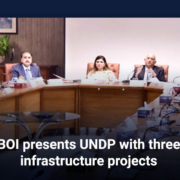 At the fair, Fareena Mazhar, the BOI, presented the projects to the United Nations Development Programme (UNDP). She stated that the projects would pave the way for Pakistan to become a success story in progress toward the Sustainable Development Goals (SDGs). She explained that these initiatives would serve as a platform for idea exchange, refinement of investment proposals, and improved project structuring to expand investment agreements in developing nations.

The three projects comprise the first two segments of the Sialkot-Kharian-Rawalpindi Motorway and medical equipment manufacturing. The programs are focused on specific SDGs, including decent work and economic growth, industry, innovation, infrastructure, and sustainable cities and communities.

These initiatives will integrate industrial cities, including Sialkot, Gujrat, and Wazirabad, via high-speed connectivity. Additionally, it would alleviate strain on large cities by producing thousands of jobs in 40 industries related to road development.

Secretary Mazhar had previously presented nine projects across all industries at the Investment Fair in April, but this time offered three shovel-ready projects to international investors following UN standards.

She stated that the Sialkot-Kharian road project would be extended to Rawalpindi in the subsequent phase, lowering business costs and increasing commercial transportation connectivity.

The BOI secretary stated that a $290 million toll road project connecting Pakistan’s largest SME (small and medium enterprise) industrial cities were designed with a total length of 69 kilometers. This strategic project would play a significant role in the country’s post-Covid economic recovery.

The second phase of this project is planned to be 115 kilometers in length. The basic design and commercial feasibility research are now underway, and funding is being sought through competitive bidding.

Concerning the third initiative, the BOI secretary stated that it would focus on three SDGs: good health and well-being, industry, innovation, infrastructure, and inequality reduction. She emphasized that completing this project will assure affordable healthcare services in Pakistan, reduce the country’s import bill, and create jobs in the healthcare industry.

The company is seeking international funding to expand and scale its activities. The initiative envisions establishing a medical device development center, a public-sector entity created by Nust to develop low-cost treatment options for individuals suffering from heart illnesses. A business opportunity exists in the manufacture of ventilators, syringe pumps, dialysis equipment, patient monitoring, and cathedrals, with the immediate expansion of three items scaling up to ten products in the following two years.