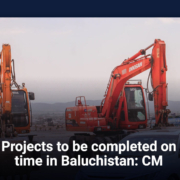 He updated the committee on new and ongoing public sector development initiatives, which were presented by Hafiz Abdul Basit, Additional Chief Secretary for Planning and Development (PSDP). According to him, the current PSDP comprises 2,286 new development projects and 1,525 ongoing development activities. He made a total of 184 presentations of flagship projects.

Chief Minister Alyani urged staff to complete new project preliminary work by September 30. He stated all initiatives were vital and should be finished on time. “Government structures should be designed with care,” the chief minister remarked. He urged speeding up ongoing development projects. “We will achieve socio-economic growth by building highways throughout the province,” he stated.