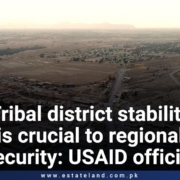 The US Agency for International Development (USAID) is assisting the government of Khyber-Pakhtunkhwa (K-P) in expanding governance, enhancing service delivery, providing economic opportunities, and constructing infrastructure in the province, particularly in newly combined tribal districts. The stability of the tribal district is crucial to regional security.

It was mentioned by Altaf Afridi, Acting Director of the USAID-KP office, during a virtual seminar in Peshawar.

During his press briefing, Afridi stated that peace and development in K-P are vital to global and regional security, particularly in the merged districts along the Afghan border.

USAID is collaborating with the Pakistani government for the stability of tribal district is crucial to regional security and increase the presence of public institutions in the newly combined areas, provide essential services, and open up economic prospects. These jointly prioritized goals are in keeping with Pakistan’s Tribal Decade Strategy for 2020-2030 and a shared goal of increasing stability by developing the former Federally Administered Tribal Areas (FATA).

(USAID) undertook a lot of work in Peshawar, including developing a water sanitation system. The agency aided in the making of a 600-kilometre road network in the K-P Merged Areas, including three main cross-border commerce routes that provided people with new business options.

The Peshawar-Torkham roadway is the busiest, with 16,000 vehicles passing through each day. In the former FATA, USAID was still working to rebuild schools destroyed by terrorists and flooding, create other infrastructure, and update the energy system. Solar panels for conventional water systems were being built in the area, according to the report.

(USAID) collaborates with the Pakistani government to provide technical assistance to province and district administrations to help them better manage and oversee public services. The stability of tribal district is mandatory to regional security, according to USAID official.

In addition, USAID collaborates closely with the Democratic Republic of the Congo government on the restoration and rehabilitation of public infrastructure that has been harmed by the region’s long-running conflict with rebels, security operations, and humanitarian crises. These reciprocal investments have improved governance metrics through enhanced public service delivery systems for drinking water and sanitation. Additionally, USAID is collaborating with the K-P administration to build a local income generation tax collection system to provide sustainable public services in the newly united districts.

Finally, the communiqué stated that USAID promotes citizen-to-government engagement on development objectives in the newly amalgamated districts to foster confidence and cooperation among citizens and KP government stakeholders.