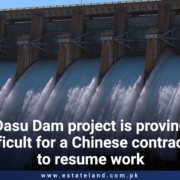 In Islamabad between the Water and Power Development Authority and China’s Gezhouba Group Company on the resumption of work on the Dasu dam project is proving difficult for a Chinese contractor.

During the discussions, the Chinese ambassador was present.
The Wapda team was led by retired Lt-General Muzammil Hussain, the chairman of the Wapda.

Following the killing of 13 people, including nine Chinese contractor , in a bus blast on July 13, work on the World Bank-funded energy project halted. The talks were postponed last week, were held in Chinese ambassador Nong Rong, Pakistani negotiators informed. Still, the Chinese corporation remained hesitant to resume work on the project for security and other reasons.

Wapda talks were inconclusive.
According to the source, the Wapda chairman told the Chinese company’s officials and ambassador about the deployment of Pakistan Army forces in Upper and Lower Kohistan and Kolai-Palas districts. He added Chinese nationals would be escorted to work and various camps along the Karakoram Highway by Pakistan Army units stationed in the Kohistan area.

According to the source, the two sides also discussed the Chinese agencies’ and counter-terrorism department’s progress on the bus blast investigation.

According to him, the Chinese government expressed gratitude to Pakistan for providing facilities and necessary protection to Chinese nationals working on the Dasu dam and other projects in the Hazara division as part of the China-Pakistan Economic Corridor plan.

According to the source, the joint military-civilian bus blast investigation is nearly complete, collecting “significant evidence” of the perpetrators. Meanwhile, after a week in the Upper Kohistan district, a World Bank team returned to Islamabad.

It held meetings with representatives from the Chinese company and the district government to discuss the Dasu power project. In addition, it worked to ensure the safety of both local and international workers.