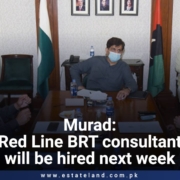 He was hosting a Trans Karachi meeting at CM House. Awais Qadir Shah, Karachi Administrator Murtaza Wahab, and Transport Secretary Shariq Ahmed were present. Next week, they would hire a consultant for Red Line, and the transport department would also hire a contractor.

The Red Line is a 26-kilometer project that runs from Airport to Numaish and is funded by the World Bank. The meeting also voted to finish hiring a consultant and contractors for the BRT Yellow Line so that work could begin. of Red Line.

The Yellow Line runs for 21 kilometers from Korangi to Numaish.

R3.12 billion for Ghotki boost
The CM said they would spend the MPCL’s Rs3.123 billion petroleum bonus and social welfare responsibility developing Ghotki’s local communities. The chief executive, Fahim Hyder, a cheque for Rs3.123bn was presented to him at CM House.

The chief minister stated that must the oil extraction area must be adequately developed. “It is the company’s responsibility to create jobs and enhance the local infrastructure,” he continued. He urged the corporation to hire locals. Finally, the CEO offered the CM to visit their field, which he accepted.

Mowach Goth Compensation
CM Shah stated that terrorists had always targeted Karachi, the country’s commercial and industrial center, but our political will, public support, and law enforcement agencies had thwarted their plans. He expressed this after extending condolences to the Mowach Goth family. “We have challenges on our eastern and western borders,” he remarked.

He said he had chaired the Apex Committee meeting to devise a strategy to counter the potential threat. He described the Mowach Goth attack as a cowardly attack on women and children, for which no banned group or other outfit claimed credit. He stated the perpetrators would be charged soon.

Mr. Shah sent condolences to the families of victims and gave the deputy commissioner of Malir Rs14.44 million to distribute to the heirs of the deceased and Rs200,000 to the injured.

Read more with EL news : An ordinance proposes a body for reclaiming properties of occupied states