According to Interior Ministry sources, the ministry authorized the CDA to name a prominent government structure after the late nuclear physicist via a letter dated October 22. Separately, the government requested that CDA name a street after Dr. A.Q. Khan.

Dr. A.Q. Khan, 85, who died recently in Islamabad, was a national hero. He was given a grand funeral at Faisal Mosque, followed by burial in the H-8 graveyard.

According to sources, several options have been considered, and the CDA will shortly select which building and road will be named after Dr. A.Q. Khan.

Government officials stated that the CDA would submit recommendations that would be finalized by the federal government, adding that significant government buildings such as the Kohsar Complex on Constitution Avenue might bear the scientist’s name.

They added that a service road in E-7, near the former residence, and a road in sector F-10 are also being considered for naming after the late nuclear physicist.
Dr. A.Q Khan was born in 1936 in Bhopal, India, and came to Pakistan with his family in 1947, following partition. He earned a science degree from Karachi University in 1960 and then pursued additional studies in metallurgical engineering in Berlin and the Netherlands, and Belgium. Following the 1971 war and India’s second nuclear test in 1974, he joined Pakistan’s attempts to produce nuclear energy. He formed the Dr. A.Q. Khan Research Laboratories in 1976 with the financial backing of then-Prime Minister Zulfikar Ali Bhutto. Finally, Pakistan successfully conducted nuclear tests in 1998, ensuring the country’s defenses were unbeatable. 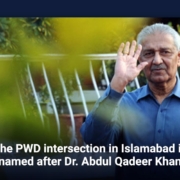 The PWD intersection in Islamabad is named after Dr. Abdul Qadeer Khan
0 replies