With building works underway concurrently at eight locations, the Pakistan Army assured project officials, laborers, and contractors working on the $14 billion Diamer-Bhasha dam on Sunday of a safe and secure working environment that will ensure the dam’s completion on schedule – in 2028-29.

During the briefing on the Diamer-Bhasha dam, project officials reported that development is currently occurring concurrently on eight different sites. These comprised access roads, a permanent access bridge across the River Indus downstream of the main dam, the 21MW Tangir hydropower project, top-down excavation of the dam abutment, a diversion tunnel, a diversion canal, and a diversion canal diversion inlet, and a power intake.

Corps commander and Wapda chairman pay a visit to the Diamer-Bhasha dam to inspect construction progress. Gen Sahir Mirza reaffirmed the army’s support for the dam’s development and stated that his institution was committed to safe and secure surroundings in the project region to enable the project’s management to carry out construction activities successfully at all project locations.

The Wapda chairman and commander of 10 Corps paid a visit to several construction sites and expressed pleasantly with the progress on a project of critical national importance. The water storage and power generation project is being built on the Indus River, 40 kilometers downstream of Chilas and 180 kilometers upstream of the Tarbela dam.

According to the Wapda chairman, the Diamer-Bhasha dam was one of the most critical projects for Pakistan’s continued development. It would provide water for agriculture, control floods, and create low-cost energy. As a result, he stated, required concerted efforts by all parties to complete the project by 2028-29.

Muzammil Hussain stated that the initiative would alter the nation’s destiny by stabilizing the economy and eliminating poverty. He noted that the project was already a game-changer for the people, with Rs78.5 billion being spent on different development programs in the project region as confidence-building measures (CBMs).

The project administrators informed visitors that CBMs in health, education, tourism, and infrastructure development were being taken to benefit the project area’s residents. They will create over 16,500 jobs during the project’s stage construction. Residents of the project area are given preference for employment, as approximately 3,200 locals have already been engaged by Wapda, the project’s consultants, and contractors.

Diamer-Bhasha dam will have a gross storage capacity of 8.1 million acre-feet (MAF), which will add 1.23 million acres of land. With a total installed capacity of 4500MW, the project will supply the national grid with more than 18 billion units per year.

The project’s construction will also increase the annual energy generation of existing hydel power stations, notably Tarbela and Ghazi Barotha, by 2.5 billion units. Additionally, the life of the Tarbela Dam, which has been critical to the country’s prosperity since 1974, would be extended by 35 years. The Army ensures the safety of contractors working on the Diamer-Bhasha dam. 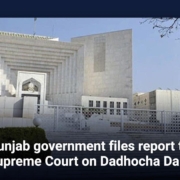