Adviser for Commerce and Investment Razzaq Dawood expressed optimism that the country’s exports would exceed $50 billion by the end of the current government’s fiscal year, 2023, due to the strategy of trade diversification in promising trade areas.

The expert told APP that a mix of export diversification, non-traditional sectors, and growing exports to new markets, especially Africa, will increase the volume of the country’s exports and help the government meet its export target.

The government’s top priority trade policy is “Make in Pakistan,” which aims to bring Pakistan’s traditional and non-traditional export sectors, as well as local products, to the worldwide market.

According to the adviser, the government will export consumer durables like cellphones and motorcycles under the same trade policy. The export of these two products to the global market would usher in a new age of engineering product exports.

Dawood stated that engineering goods exports presently account for 51% of the global trade market and that the government is increasingly focusing on non-traditional areas such as engineering and pharmaceuticals. He claimed that INOVI Telecom, a Karachi-based electrical and electronics goods company, had recently shipped the first consignment of 5,500 “Made in Pakistan” 4G mobile phones to the Middle East.

According to the advisor, this will mark the start of a new age of high-value-added exports from Pakistan and a shift in product diversification from traditional to non-traditional areas.

“I urge other Pakistani mobile phone manufacturers to follow this lead and export their products,” he said.

When the US Secretary of State for Commerce visited Pakistan recently, he highlighted several traditional trade products under his trade facilitation scheme, the Generalized System of Preferences (GSP). However, Pakistan had not yet exported commodities to the US trade market, according to the adviser.

He went on to say that the government intended to boost exports to Europe and the United States by making its trade items more globally competitive. Pakistan would begin exporting 10,000 motorcycles in the future years to sell 30,000,000 motorcycles annually. He stated that the Japanese corporation “Honda” has decided to establish its production unit in Pakistan, making Pakistan a motorbike manufacturing powerhouse.

In the following years, they will begin exporting motorcycles worth $30 million from Pakistan. 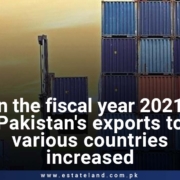 They would finalize the Lahore master plan in conjunction with the LCCI: LDA...