DHA Peshawar will commence construction in Sector G1. A post on the authority’s official Facebook page on August 23 said that the Defence Housing Authority (DHA) in Peshawar is getting ready to start building in Sector G1.

Details show that the government has set up a groundbreaking ceremony for tomorrow (August 24). The National Logistics Cell will start developing Sector G1 after the ceremony (NLC).

In other news, the DHA Peshawar administration broke ground on August 12 for the building of ten five-marla houses in Sector Prism. A video on the official Facebook page shows the ceremony. During the ceremony, top officials from DHA Peshawar and the M. Afridi construction company spoke to the public and praised the work of the DHA administration to build affordable homes in a safe neighbourhood. 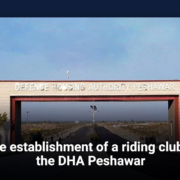 The establishment of a riding club in the DHA Peshawar