Khyber Pakhtunkhwa (KP) Chief Minister (CM) Mahmood Khan told the right people on Monday (January 16) to give land to the Pakhtunkhwa Highways Authority (PKHA) so that the Swat Motorway Phase-2 and Dir Motorway projects can be built, according to news sources.

Read more with EL news: On IJP Road, work on the landscaping has begun

During a meeting to talk about all the ongoing development projects in the province, including community development projects, the CM gave these orders. CM Mehmood asked PKHA to speed up work on different parts of the Swat Motorway Phase 2 project so that it could be finished as soon as possible.

The meeting was told that the Swat Motorway Phase-2 is being built with the help of a Public-Private Partnership (3P). The paperwork for this project is almost done, and work has already begun on the land given to the PKHA.

Also, about the Dir Motorway, it was said that 30 kilometres of land in Adinzai and Balambat tehsils had been picked out for the project and that the process of buying the land was going on right now. It’s important to know that the Dir Motorway is being built from Chakdara Interchange to Baroon (Dir Lower) at a total cost of PKR 53 billion rupees. 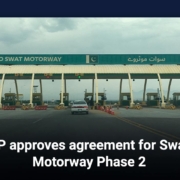