The District Council has approved the Blue World City NOC on 13 Dec 2021. This news comes at a time when a lot of negative rumors are spread about this venture regarding its legality. After successful negotiations between the owners and Rawalpindi Development authority, the decision of jurisdiction between RDA and district council has been concluded by the Government. This news further boosts up the confidence of investors. Furthermore, with the latest NOC update, more investors would fall in line with Blue World City approved.

The Governor of Punjab signed a Local Bodies Ordinance 2021 on 11th December 2021, firmly states that the NOCS of all residential projects should be granted by the district council Rawalpindi. Although the district council already granted the blue world city the NOC, vide letter no 532 / 10/ DC dated 07-08-2018. 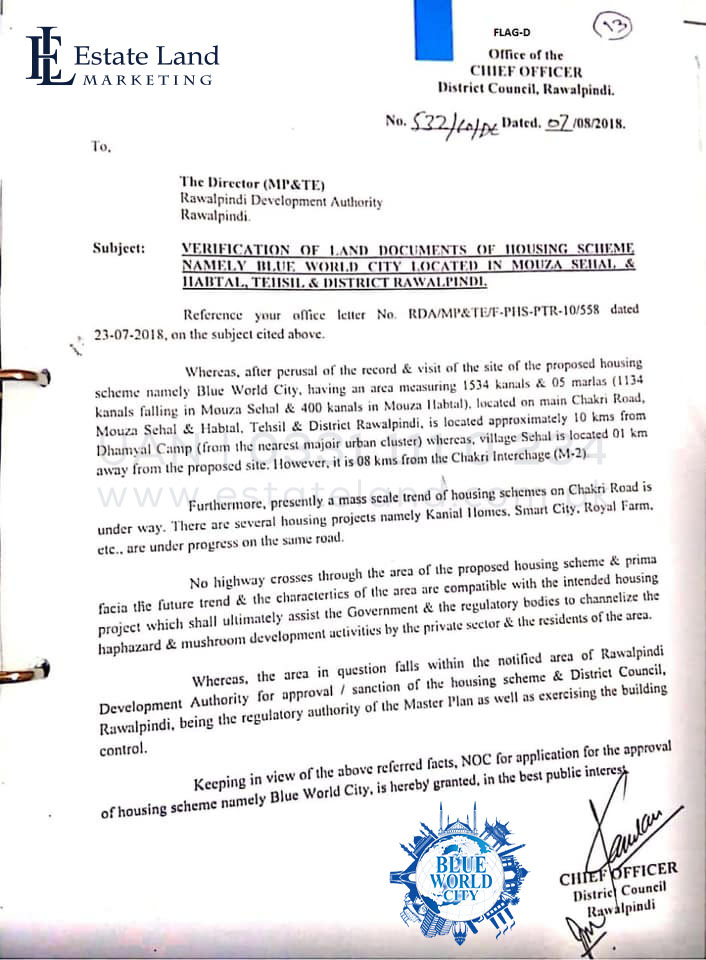 Blue World City is a remarkable real estate venture by Blue Group of Companies and Shan Jian Municipal Engineering Company. At first, some real estate experts considered it an illegal housing society. The owners of this project were in negotiation for the NOC for the past few years. This project spreads over more than 1500 Kanal of land area at Chakri Road near Mouza Sehal and Habital. It is almost 10 km away from the Dhamyal Camp.

NOC is a mandatory document for any property because it gives formal authorization to construct a new property. As per the latest Blue World City NOC update, the project developers will not face any legal hardships in the future.

After issuing Local Bodies, Ordinance 2021, Blue world city finally attained confirmation. After this announcement, the prices of the plots would further increase. With the blue world city approved by RDA, its investors at its earlier phase would now have all the benefits of this project. The construction work would automatically speed up so that this project finishes promptly.