E-12 CDA anti-encroachment campaign retrieves 350 Kanals. News sources said that on Wednesday (June 8), the Capital Development Authority (CDA) led a big effort to get back government land in Sector E-12. As a result, the police were able to get back 350 Kanals of state land that had been illegally taken over.

The operation is said to have happened in front of a large number of police officers and the city district administration. On state land, it was found out that the government had taken down illegal streets, boundary walls, and other buildings. Later, the land was given to the proper departments.

It’s important to say that the CDA is currently building Sector E-12. The authority has set aside $289.805 million to develop water supply, construct connecting roads, including main highways, drainage system, installation of street lights, sewerage networks, and other uplift works. In March of this year, the government also gave 120 plots to their owners. 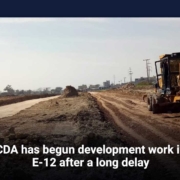 The government releases the Pakistan Economic Survey (PES) for FY22