For the Sambrial-Kharian highway, 64 villages will be purchased. At least 180 acres of land may be acquired for the 69-kilometre Sambrial-Kharian motorway, as the survey of buildings, trees, and other infrastructure along the proposed route has not been completed.

However, sources indicate that approximately 160 to 180 acres of land may be acquired, as the deputy commissioners of both districts have already notified the villages under Section 4 of the Land Acquisition Act.

The NHA reportedly requested that the local administration survey buildings and trees along the designated route. The survey has begun in Sambrial and will continue in Gujrat and Kharian tehsils, following which an assessment of the land and building values will be made.

Rafaqat, the NHA’s project director for the Sambrial-Kharian motorway, says the federal government has allocated Rs4 billion for land acquisition, while the contractor firm, Frontier Works Organization (FWO), will bear the construction costs, as the project is being implemented through a public-private partnership (PPP). He estimates that the surveys and land acquisition will take three months to complete, and construction will begin the following payment to the landowners.

According to Rafaqat, the route will include at least five interchanges and a junction near Kharian and a rest area.

The Sambrial-Kharian motorway extends the Lahore-Sialkot motorway (M11); however, similar to the first phase (Lahore-Sialkot), the second and third phases are the second and third phases up to Islamabad are being built as dual carriageways with two lanes on each side. The M11 can add a third lane on both sides, provided sufficient land is available. 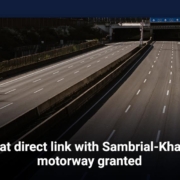 A recovery authority has been established to reclaim government property