Read more with EL news : Local governments’ efforts to uplift the limbo are under jeopardy

Moonis Elahi then met with Murad Saeed, and it decided to build the Gujrat link on the model of the Faisalabad motorway, a gated dual carriageway. On GT Road, near Kathala Chenab, an official indicated the Gujrat-to-motorway link was most likely to be built. After announcing that the link road would be completed in two years, the PML-Q followed through on its promise.
Some travellers taking the Lahore-Sialkot-Khian highway, which is expected to be expanded up to Rawalpindi/Islamabad via Jhelum and Mirpur, may find the direct link from this city more convenient than the alternate route through Gujrat (Azad Jammu and Kashmir).

Even though all five interchanges on the Sambrial-Kharian road were supposed to be built inside the boundaries of this city, he said they put them in rural areas far from the city. The Sambrial-Kharian motorway in Gujrat has been approved. Furthermore, the federal administration granted an extension of a dedicated link road connecting Gujrat with the Sambrial-Kharian highway (M-11).

The PML-Q declared the connection road would be finished in two years.
Those going along the Lahore-Sialkot-Kharian expressway, which is anticipated to be extended up to Rawalpindi/Islamabad through Jhelum and Mirpur, may find the direct link from Gujrat easier (Azad Jammu and Kashmir). 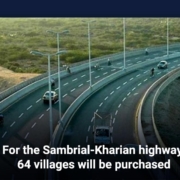 For the Sambrial-Kharian highway, 64 villages will be purchased
0 replies

Staying the auction of Lahore’s Walton airport property was denied