Asad Umar, the federal minister of planning and development, said that the government is improving the governance structure in the federal capital and implement a single regulatory framework.

Asad Umar told that will remove the discriminatory system of previous governments and that the Capital Development Authority (CDA) would now be in charge of housing societies. According to the minister, Ghazi Barotha would also launch a new water system to give 100 million gallons of water every day to Islamabad.

He said that the government did an outstanding job in the federal capital’s rural neighborhoods and that work on four hospitals is currently underway.

So, what are the barriers to servicing citizens who live in rural villages, slums and don’t have access to sanitation, clean water, or essential nutrition? What are structural adjustments required to ensure that public spending has a beneficial impact on the lives of those who most need it?

Incentives, decision-making processes, and accountability are more critical than incompetence and corruption. Don’t get us wrong: we have “accountability,” and we put a lot of effort into “process accountability.” Everyone is working hard to ensure that no single rupee is stolen, from PC-1s to PPRA guidelines to the NAB and the Auditor General.

There is always a room of improvement and the government is improving the governance structure to work more efficiently and diligently. They will remove the discriminatory system of previous governments and will work with advance and effective governance structure. CDA will be in charge of every housing society from n ow onwards in Islamabad so that the measurements on hazards would be taken by them before. New water system to provide water to the people accordingly.

Read more with EL news: The Aab-e-Pak project is being launched in Rawalpindi by the Governor of Punjab 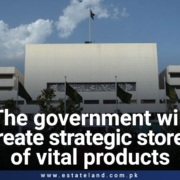 The government will create strategic stores of vital products
0 replies

The Aab-e-Pak project is being launched in Rawalpindi by the Governor of Pu...