MDA governing body approved yearly budgets of Rs5.534 billion and Rs5.648 billion for the MDA budget and the Water and Sanitation Agency, respectively, on Wednesday Wasa.

The conference agreed to a 10% ad hoc relief on salary on the instruction of the provincial government, as well as a 10% rise in the pension of both MDA and Wasa retired personnel. Furthermore, Rs2 billion had been set aside to relocate the iron, grain, and truck stand from their current locations. In contrast, Rs1.232 million had been set aside for non-development costs, such as salaries.

A total of Rs1.244 billion has been set aside to build and repair roads in Fatima Jinnah Phases 1 and 2, New Shah Shams Colony, Model Town Phases 1 to 3, and the construction of a flyover on Madni Chowk. 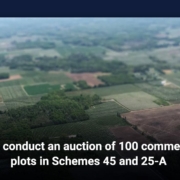 Met Office, flooding and landslides are forecast in the country