Attorney Shazib Masud stood before Justice Shahid Karim to argue against the stay. The judge disapproved of Ruda’s practice of regularly changing attorneys. He felt the administration was being dishonest.

The judge denied Advocate Masud’s request to represent Ruda and summoned its CEO, Imran Amin. The hearing resumed with the Ruda CEO’s appearance. Ruda had previously changed four lawyers without receiving a no-objection certificate from each previous lawyer, Justice Karim remarked. He indicated the new attorney appeared without the old counsel’s NOC.

The judge threw down the government and Ruda’s applications and fined the authority Rs500,000. The judge also chastised the CEO for not signing the application. The CEO asked the court for an apology and argued the project was public. Furthermore, the stay on the proposal had prevented the government from building a road. The judge said the Ruda case indicated the multi-billion dollar project was in the hands of inept people.

Read more with EL news : An architect to transform Daman-E-Koh into a lovely tourism location

Farmers’ lawyers Sheraz Zaka and Ahmad Rafay Alam filed petitions opposing the proposal. The petitioners contested Ruda’s land acquisition procedures for the project. There were 18 awards in one day, despite protests from the landowners, they alleged. 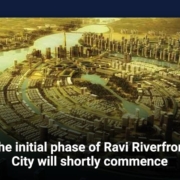