The new Ravi city’s features will be evident in three to four years. Modelled after Dubai and Singapore, Ravi city will span 100,000 acres. According to a Ravi Urban Development Authority (RUDA) official here on Thursday, its structures will be architectural marvels for the globe.

He stated that the public is aware of Ravi City’s benefits and that they should contribute to the success of building a new city that will address housing, infrastructural, water, and environmental concerns in old Lahore.

He dispelled the perception that he had obtained the land violently to create the new city, stating that the affected residents would be accommodated through various procedures. Furthermore, he said that private developers would be unable to undermine the public interest in the newly planned metropolis.

Locals would be given preference for jobs, health care, and education in the new city, adding that residents of the area chosen to develop Ravi Riverfront City would have the first right to jobs.

He stated that the new city was necessary since Lahore was facing numerous issues due to inadequate municipal planning, adding that the city’s master plan should have been amended countless times in the past but was not. The Ravi Riverfront City’s first phase will start soon.

Ravi City’s 46-kilometre length and 3,280-foot breadth, enclosed by a 33-foot high wall, would prove to be a gift to Lahore.

Three barrages would be constructed to raise the riverfront’s water level since the project was intended to produce tremendous financial activity by creating new jobs, homes, a clean environment, and modern facilities.

However, 836 cubic metres of untreated domestic wastewater was dumped into the project area of the Ravi River, and the development of a lake would purify the Ravi and provide 271 billion liters of water. In contrast, the wastewater treatment plants would help treat 2.4 million liters of water to irrigate 75,000 acres of land.  The initial phase of Ravi Riverfront City will shortly commence.

When a natural disaster, such as flooding, the city could control a water flow of 586,000 cusecs, as the feasibility existed before the project’s start.

Until now, the Lahore Development Body (LDA) has received 171 applications to establish housing societies on the site of Ravi City. While the LDA did not approve the petitions, the authority said it would engage agriculture specialists to begin farming on modern lines in the new city. The initial phase of Ravi Riverfront City will shortly commence. 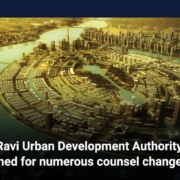 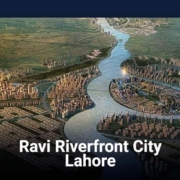