The Hyderabad-Sukkur highway will be built soon: minister. Federal Minister of Communication and Postal Services Murad Saeed announced on Saturday that bids for the Hyderabad-Sukkur stretch of the motorway have been received and Prime Minister Imran Khan would shortly perform the project’s groundbreaking ceremony.

While addressing a press conference here at the Sindh Assembly building with opposition leader Haleem Adil Sheikh and other PTI elected MPs, Murad Saeed stated that the PTI administration would launch Hyderabad-Sukkur Motorway as its first project.

“It will be a gift to the Sindhi people,” he explained. The federal minister stated that the Centre was constructing a lot of highways and roads in Sindh to improve the province’s communication and transportation infrastructure. He declared that the Green Line of the Bus Rapid Transit (BRT) system will be opened in December, providing the people of Karachi with the improved commuting facilities they had been clamouring for.

The minister continued by stating that another significant project, the 786-kilometer-long Karachi-Quetta-Chaman motorway, had reached an advanced stage and building will begin soon. The federal minister noted that the Centre was also contributing to the building of the Karachi Circular Railway, as well as the completion of various highways and streets in the city via federal funds.

Another road project in the Umerkot district has been completed and will be launched on Sunday, the minister announced. Murad Saeed stated that the people of Sindh were suffering as a result of the PPP’s provincial government’s poor governance and corruption, while democratic standards were being eroded by self-proclaimed “champions of democracy.”

He alleged that the party that taught democratic ideas in the National Parliament and Senate was undermining democratic principles in Sindh by preventing the opposition from participating in the provincial assembly.

“It is deplorable that opposition parties in Sindh are denied membership in the Public Accounts Committee and standing committees, he observed, whereas Shahbaz Sharif was appointed chairman of the PAC despite being accused of corruption.

While denouncing the barbaric deaths of Fahmida Sial, Nazim Jokhio, and Sakhawat Rajput, the minister stated that Sindh’s law and order situation was out of control due to the murders of powerful individuals. Um-e-Rabab was yet another victim of injustice in Sindh, since her father and other family members were slain while she pursued justice.

Saeed further accused the PPP of delaying federally sponsored projects in Sindh, claiming that the provincial administration objected to education and health initiatives supported by the MNA budget, citing the 18th Amendment and provincial autonomy.

“However, the same Sindh administration attempted to strip local government institutions of their constitutional rights and obligations,” he explained. The minister noted that Sindh had breached Article 140-A of the Constitution, which called for the financial, administrative, and political empowerment of LG bodies.

He stated that Prime Minister Imran Khan intended to implement electronic voting (EVM) to ensure transparent and fair elections, whilst the PPP desired secret balloting in the LG system to permit rigging and the appointment of unelected officials.

According to the minister, Sindh’s health, education, law and order, and other sectors have been decimated, with hospitals lacking physicians, medications, and ambulances, and schools lacking teachers and furniture. “The PTI has implemented historic reforms in Khyber=police, Pakhtunkhwa’s education, environment, and health sectors, repositioning the province on the path of progress and prosperity. He continued by stating that every resident in K-P had access to improved health services via health cards, and that the same facility was also available to the masses in Punjab, Gilgit-Baltistan, and Sindh’s Tharparkar area.

Murad Saeed stated that wheat flour and sugar were more expensive in Sindh as a result of the PPP Sindh government’s erroneous policies and unethical actions. In response to a question about the Indus Highway’s improvement, the communication minister stated that while no progress had been made on the project until 2018, PTI began work on the project after assuming power, and motorway police were also deployed on the highway.

“The project will be completed shortly,” he added. In response to a question concerning the Karachi-Hyderabad Motorway M9, Murad Saeed stated that the communication ministry was in contact with the Sindh government to rehabilitate the road.

The Hyderabad-Sukkur motorway will be constructed as quickly as possible. 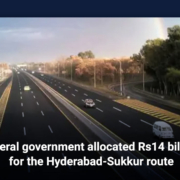 Construction of Islamabad Korang Bridge to End in April 2022