Due to the unique Miyawaki technique, the forest has been produced over 100 Kanals with 165,000 plants that will grow ten times faster than a conventional forest. To create fast-growing urban forests, it employs specialized land preparation and indigenous types with variable growth rates.

Another 53 Miyawaki kinds of wood are being planted in various sections of Lahore to build carbon sinks and improve pollution reduction in the city. All of them have been geo-tagged so that they can track their growth and development.

“Prime Minister Imran Khan is attempting to resurrect Lahore as the city of gardens it once was,” according to a news. The ongoing monsoon plantation operation, which is the largest ever, is planting almost 500 million trees.

“Looks like finally, we will have elections in Pakistan where all contestants will accept the results,” the prime minister wrote on Twitter, referring to his recent inspection of locally-manufactured EVM. Meanwhile, the government claimed on Sunday that it had contained the Covid-19 pandemic thanks to its brilliant strategy “that not only protected people from the fatal infection but also prevented the spread of the disease.”

It will be the world’s largest Miyawaki urban forest. Green plants are critical to the human environment and the long-term viability and health of environmental systems. It is one of the splendid initiatives taken so far for the betterment of the territory of Lahore.

Lahore, once a Green City, is now a Concrete City.

Housing plans have become a need as Lahore’s population grows by the day. However, these large-scale development plans decrease the quantity of area that may use for tree planting. Land developers often use the gap because there is no regulation prohibiting the conversion of prime agricultural areas for housing or commercial purposes. It is important to remember that when unplanned housing plans are built, the expense of constructing roads and other infrastructure is once again borne by the government.

Prime Minister Imran Khan’s intention to open the world’s largest Miyawaki urban forest in Lahore is fantastic. It will aid in the improvement of weather and climate conditions and benefit our health and well-being.

Read more with EL news: The Sahukat Khanum Flyover would be completed soon 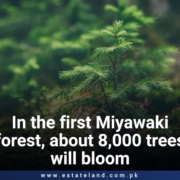 In the first Miyawaki forest, about 8,000 trees will bloom
0 replies

According to the RDA’s chief, they rendered the Ring Road project to the...