Ayub Khan had exempted the revenue estate of Golra, which included the parcels E-11, E-12, F-12, and D-12, from the land acquisition in connection with the Golra Shrine. Later in the 1980s, then-President Ziaul Haq restricted the revenue estate to E-11 Islamabad solely through an ordinance.

According to sources, the CDA failed to enforce its ordinances in E-11 Islamabad due to unacquired and exempted land, resulting in the mushroom development of unauthorized buildings. CDA attempts to have the former president’s ordinances about the Golra revenue estate revoked.

In short, the CDA attempted to have both ordinances enforcing its rules in the sector revoked to bring it into line with other sectors in Zone I. The CDA compiled the summary following a recent urban flooding incident in E-11 Islamabad that claimed the lives of a woman and her child.

“We want the former two presidents’ directives rescinded to put an end to the misunderstanding surrounding E-11 Islamabad. Although we do not wish to buy this sector, we will enforce all applicable bylaws,” a CDA officer stated.

The CDA declared in summary that it would pursue punishment against its culpable staff and housing schemes. However, it would safeguard residents’ rights, and developers of projects would be required to shoulder the costs of relocating structures placed on the right of way of nullahs, as recent urban floods were caused by the narrowing of a nullah from 40 to 18 feet.

After the summary is approved, the CDA will commission a hydrological and infrastructural analysis of housing schemes and stand-alone high-rise apartment complexes at the expense of the projects’ sponsors.

CDA authorities stated that exempting the sector from land purchase produced many urban challenges, including flooding, traffic hazards, drain constriction, and environmental concerns. The width of the E-11 Islamabad drain was 40 feet in the Medical Cooperative Housing Society’s initial layout plan in 2007 but was reduced to 18 feet in the revised-as-built program and approved by CDA in 2012, despite strong opposition from the then-deputy director concerned, who detailed all facts on the case file.

Additionally, he advised that no street in this housing development be less than 40ft wide. However, the housing design scooped off approximately 40 commercial and residential plots in addition to narrowing the nullah.

According to sources, previously constituted a three-member team was on the directive of the CDA chairman to investigate the matter of the medical society that received clearance for its layout design in 2012 but was later canceled in 2016.

Read more with EL news : An ordinance proposes a body for reclaiming properties of occupied states 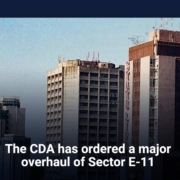