SHC orders dismantling of unlawful dwellings erected on road land. On Tuesday, the Sindh High Court ordered the demolition of 130 buildings in Mustafaabad that were built on property intended for a road connecting Anda Mor, New Karachi in district central to Monghopir in district west.

The ruling was handed down by a two-member panel led by Justice Zafar Ahmed Rajput during a hearing on a petition contesting road encroachments.

The counsel for the Karachi Metropolitan Corporation (KMC) admitted that the road’s land was granted to persons for residential purposes in 1982 by the KMC’s Katchiabadi department, and was later regularized by the Sindh government in 1987.

During the hearing, it was revealed that the SHC had ordered the road’s restoration 15 years ago but it was not carried out. The KMC’s attorney informed the court that residents had previously been issued notice to vacate their homes.

Read more with EL news : Possession of plots in Islamabad’s E-12 district is still a long way off

The judgement directed that residents whose homes were to be demolished get compensation and replacement land prior to having their homes evacuated.

The bench determined that the dwellings would be removed only after paid compensation and replacement land were provided. Additionally, the court requested a report on this matter from the KMC and others within a month.

Additionally, the same bench requested a report on the legal status of land in cantonment zones where commercial centers had been created on territory ostensibly designated for defense use.

The Defense Housing Authority and other cantonment boards requested additional time to file responses to a petition contesting commercial activity on land assigned to defense institutions for defense purposes.

The petitioner sought to declare illegal marriage halls and banquets in Defense Phases 7 and 8, Signature and Imperial banquets on Dalmia Road, the Imtiaz Super Store in Zamzama, and banquets near Karachi International Airport. 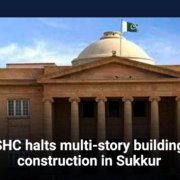 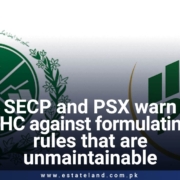 The RCCI desires industrial zones alongside the Ring Road