The CDA has begun work on a project to construct a plastic road. The Capital Development Authority (CDA) has launched a pilot project in the federal capital using the plastic road concept.

According to the CDA, Islamabad collects between 500 and 600 tones of municipal waste daily and 150 to 180 tones of plastic waste. Environmental pollution will be significantly reduced as a result of recycling the collected plastic, the company stated. It would be such a great initiative in the history.

At F-9 Park, the trial project has begun. It is Pakistan’s first initiative of its kind, and it is being launched in collaboration with a private company, according to the CDA. It would turn great if it goes well.

The CDA signed an agreement with a private beverage company a month ago, and work has begun on a pilot project. Environmental pollution will be significantly reduced as a result of recycling the collected plastic.

After the project’s findings are analyzed, we will implant the project in Islamabad and other cities across the country so that it can benefit all.  After evaluating the initiative’s outcomes, a one-kilometer road will be constructed using the plastic road concept. If this concept goes well then a tremendous outcome will be seen and benefited all around.

The project’s test engineering results will be compiled today and will implant the technology in other parts of Islamabad for road construction. After evaluating the final results, we will transfer the technology to the MPO directorate’s asphalt plant. 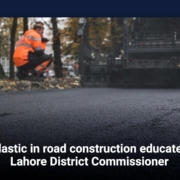