During a reception organized by the PTI Shopkeepers Wing, the minister stated that after the Rent Control Act is approved, a long-standing demand of Islamabad’s traders will be met.

Islamabad’s traders’ community has been campaigning for years to alter the Rent Restriction Ordinance 2001.

The PTI government has stated that once the Rent Control Act is passed, it will equally protect tenants’ and landlords’ rights.

Traders have stated that forced eviction from businesses is a long-standing concern for renters who have operated their businesses for decades and have been threatened with eviction.

He also promised businesses that Islamabad’s parking problem, which has reached an alarming level, will be handled as part of the emergency action plan.

At the request of Waqar Bakhtawari, Secretary-General PTI Traders Wing, the planning minister, stated that he would shortly meet with a group of traders to discuss parking. Islamabad’s primary issue is dwindling parking spaces.

Business owners and residents have been confronted with parking issues in all commercial districts, notably in the Blue Area and F-8 Markaz.

CDA agreed a few months ago to develop two parking plazas, one in the Blue Area and one in the F-8 Area, to address the parking issue.

The minister assured the Islamabad Chamber of Commerce and Industry of his unwavering support for constructing an industrial zone around Islamabad and requested that the chamber’s leadership contact him over the matter.

Ali Nawaz Awan, Special Assistant to the Prime Minister (SAPM) on CDA, stated that the current government has been quite effective in strengthening the economy despite difficult economic situations. Additionally, he stated that traders’ issues would be addressed on a priority basis.

Traders Wing of PTI While praising Asad Umar, Ali Nawaz Awan, and Raja Khurram Nawaz for their efforts to resolve the problems of Islamabad traders, Islamabad Secretary-General Waqar Bakhtawari stated that parking is the market’s primary issue at the moment. The CDA must urgently construct a parking plaza and parking area, or else the markets in Islamabad will be unable to accommodate parking, posing difficulties for traders. 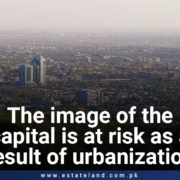