Residents of the DHA Bahawalpur now have access to 4G services, which was previously unavailable. A Base Transceiver Station (BTS) tower, erected by one of Pakistan’s leading mobile phone service providers, Zong Pakistan, was dedicated to the nation’s military on Tuesday, December 14. The tower was dedicated by the administration of Defence Housing Society (DHA).

Read more with EL news : Locals believe that roads of Kaghan should be rebuilt

According to sources, Brig Basharat Ali, the project’s director, officially launched the project by installing BTS towers, which would allow users to access 4G services in the future. This has been recognized by the DHA administration as a vital step toward improving the living environment in society. The administration of DHA Bahawalpur is committed to upholding that commitment and increasing the quality of life for the citizens of the city.

It is important to remember that the DHA Bahawalpur and Zong administrations reached an agreement in November to provide mobile phone services to members of the community. According to the specifics, the mobile operator will provide mobile services in the villas located in sectors A, B, C, and D.

Those who signed up before the deadline were eligible for special discounts on the plots, which were issued in October and will be paid for over three years. A unique chance to make a long-term investment in a thriving community is being offered by DHA Bahawalpur to the general public. 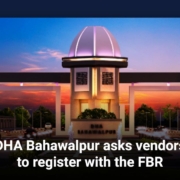 DHA Bahawalpur asks vendors to register with the FBR 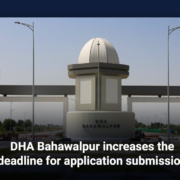