The CPEC JCC will meet for the tenth time next week. A meeting of the Joint Coordination Committee (JCC) for the China-Pakistan Economic Corridor (CPEC) is expected to take place in Islamabad next week, according to Special Assistant to the Prime Minister on CPEC Khalid Mansoor, who stated on Monday that the much-anticipated 10th session would take place in Islamabad next week.

Mr Mansoor, speaking at his first press conference since taking over as Chairman of the CPEC Authority, expressed optimism that the JCC meeting would be held on either September 23rd or September 24th this year. In his remarks, he stated that Pakistan is dedicated to pushing forward with the development journey covered by the second phase of the CPEC. He said that Pakistan wants projects finished in the second phase at a higher rate than previously.

Asad Umar, the Planning Minister of Pakistan, and Ning Jizhe, the Vice Chairman of the National Development and Reform Commission (NDRC) of China, are set to lead their respective delegations to the commission’s meeting.

The Joint Coordinating Committee (JCC) meets once a year to examine the status of projects funded by CPEC and identify potential new initiatives. The committee’s most recent meeting took place in January of this year. The tenth summit was scheduled to take place in 2020. However, it was postponed because to the Covid-19 pandemic. Even yet, a handful of attempts were made to hold the meeting, but they were all unsuccessful due to the unstable security situation. Finally, in July, Asim Bajwa, the then chairman of the CPEC Authority, announced that the JCC meeting would be held on July 16, but cancelled the meeting due to insufficient attendance.

It is expected that the Joint Collaboration Committee would review prospects for industrial cooperation between the two countries during its meeting. Before the JCC, the Joint Working Group on Industrial Cooperation will convene, followed by the JCC. According to the report, the China-Pakistan Economic Corridor (CPEC) has nine joint working groups, seven of which have already met.

It has been learned that Pakistan would stress the importance of expediting the building of the Main Line-1 (ML-1) project of Pakistan Railways in the coming days.

The chairman of the China-Pakistan Economic Corridor (CPEC) stated that the Chinese authorities have been informed of the overall security situation in the nation and that additional security measures have already been implemented. However, due to the recent attacks, Chinese officials have expressed concern about their security.

In addition, Mr Mansoor stated that during the JCC meeting, recommendations for new projects authorised by joint working groups in sectors including agriculture, science and technology, energy, and infrastructure would be brought up for debate.

At the event, chief executives from the enterprises based in the Faisalabad Industrial Estate and Manufacturing Company — a Special Economic Zone in Punjab that has been designated a priority by the China-Pakistan Economic Corridor (CPEC).

The construction of Pakistan Railways’ Main Line-1 (ML-1) project would cost $6.8 million. It has been corrected. The project’s true cost is $6.8 billion, not $6.8 billion, as previously stated. To reflect the proper statistic, the story has been updated. The inaccuracy has been acknowledged. 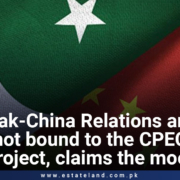